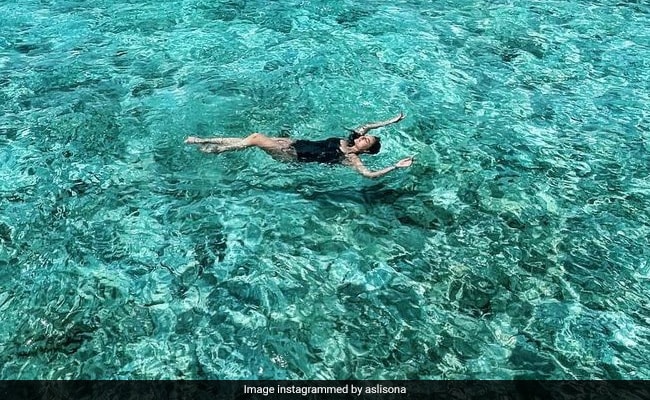 Sonakshi Sinha summed up her current mood with a throwback picture. On Sunday, the actress posted a throwback picture from Maldives, where she was on a holiday last month. In the picture, Sonakshi Sinha, dressed in a black swimsuit, can be seen chilling in the blue waters of Maldives. Sonakshi added a humour-infused caption to her Instagram post and she captioned it: “Sona jal ki rani hai… Jeevan uska paani hai.” (Sonakshi’s Instagram moniker is ‘Aslisona’). She accompanied her post with the hashtag #sundaystateofmind. Check out Sonakshi Sinha’s post here:

During her stay in Maldives, Sonakshi Sinha posted pictures and vidoes from her scuba diving sessions. She captioned one of her post: “Knighted by the holy fins! I am now a licensed scuba diver… something i have been wanting to do for years, and finally got down to it! My love for the ocean has just grown ever since my first snorkel experience and this is taking it to a whole new level… thank you Oceanic World Maldives for giving me my super strict and super cool instructor Mohammed, I couldn’t have asked for a better teacher (I mean this is the first time I’ve scored a 100% in any exam).”

Here are some more posts from Sonakshi Sinha’s Maldives diaries:

Sonakshi Sinha made her Bollywood debut with the 2010 film Dabangg, opposite Salman Khan. She has starred in several super hit as well as some critically acclaimed films like Rowdy Rathore, Son Of Sardaar, Dabangg 2, Holiday: A Soldier Is Never Off Duty, Lootera, Once Upon A Time In Mumbai Dobaara, R… Rajkumar, Action Jackson, Kalank and Mission Mangal, among others.

Sonakshi’s last theatrical release was Dabangg 3, co-starring Salman Khan. Her upcoming project is Bhuj: The Pride Of India, starring Ajay Devgn in the lead role. The film is slated to release on OTT platform Disney+Hotstar.