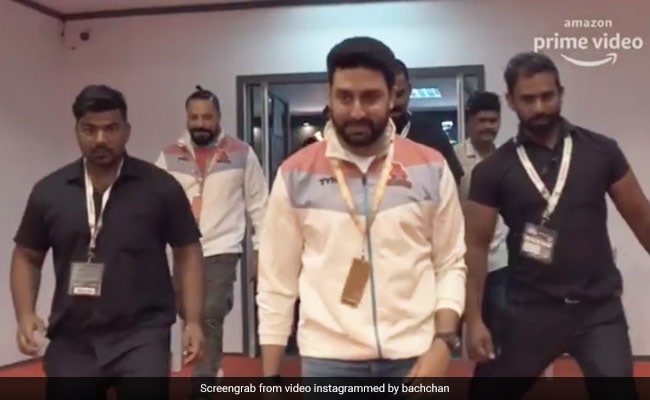 Abhishek Bachchan in a still from Sons Of The Soil. (courtesy bachchan)

The trailer of Amazon prime Video’s upcoming series Sons Of The Soil hit the Internet on Friday and it had us hooked immediately. It wouldn’t be wrong to say that the trailer is a perfect amalgamation of nail-biting moments and some never-seen before drama, which will incite your curiosity to a different level altogether. The trailer showcases the journey of the team Jaipur Pink Panthers in the Pro Kabaddi League. The video begins with a visual of Abhishek Bachchan, who owns the Kabaddi team, motivating the players. He establishes his motto in a sentence -” I like to celebrate a victory and I really don’t like losing.” There’s also a glimpse of Abhishek Bachchan’s father and Bollywood veteran Amitabh Bachchan  in the video. Jaipur Pink Panthers’ official page shared the video on social media and wrote: “The Panthers are all set to leave their mark beyond the mat.”

Abhishek Bachchan, sharing the trailer on Instagram, wrote: “I have never been this excited in my life. This journey has been truly life-changing, can’t wait to share it with you guys! Sons Of The Soil, new series, December 4 on Amazon Prime Video.”

Check out the video here:

Just a day before sharing the trailer of Sons Of The Soil, Abhishek Bachchan shared a picture from his team Jaipur Pink Panthers’ winning moment, on his Instagram profile. The picture also features Abhishek Bachchan’s wife and actress Aishwarya Rai Bachchan posing with the team and the trophy. “6 years ago we started this exciting journey on a winning note. The 1st ever champions of the Pro Kabaddi league! We roared like panthers do. I am confident that my Sons Of The Soil will come back stronger,” he wrote.

Sons Of The Soil is Abhishek Bachchan’s second project with Amazon Prime Video. The actor starred in the web-series Breathe: Into The Shadows earlier this year. Abhishek Bachchan was last seen in Anurag Basu’s film Ludo.