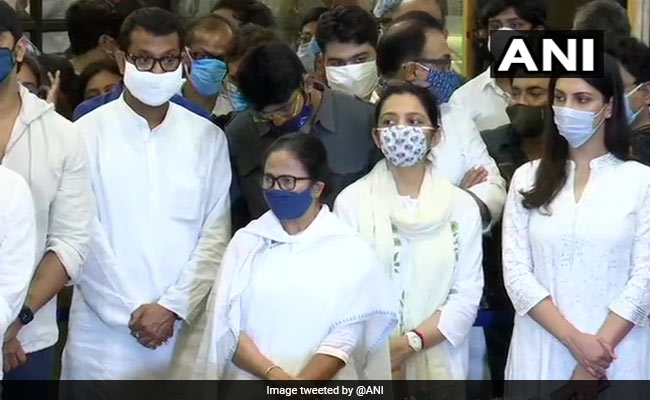 One of the Bengali film industry’s greatest actors, Soumitra Chatterjee died on Sunday afternoon in Kolkata. The actor, 85, died 40 days after he was admitted to Kolkata’s Belle Vue Clinic with COVID-19. His funeral was held at Keoratala Crematorium in Kolkata on Sunday evening with complete police honours. He was honoured with gun salute by the Kolkata Police. West Bengal Chief Minister Mamata Banerjee, who was also at the hospital this morning to be with the actor’s family after his death, attended the funeral. Several cinema personalities from the Bengali film industry were also present. Soumitra Chatterjee’s last rites were preceded by a funeral procession from Rabindra Sadan to Keoratala Crematorium, which was attended by hundreds of fans, Bengali cinema celebrities and Chief Minister Mamata Banerjee.

At Soumitra Chatterjee’s funeral procession, artists and celebs paid tributes to the late actor by reciting poems composed by him and singing Rabindra Sangeet, creating a mournful but surreal atmosphere.

Soumitra Chatterjee was admitted to Belle Vue Clinic on October 6, a day after he was diagnosed with COVID-19. The actor tested negative a little after a week on October 14 but his health condition deteriorated after that. He was put on several life support systems this week after he stopped responding to treatment. “Soumitra Chatterjee is not responding to treatment. Even miracles may fall short in this situation,” a doctor treating the thespian at the hospital had said in a medical bulletin on Saturday.

On Sunday, an official statement about his death read: “We declare with heavy heart that Shri Soumitra Chattopadhyay breathed his last at 12-15 pm at Belle Vue Clinic today (15 November 2020). We pay our homage to his soul.”