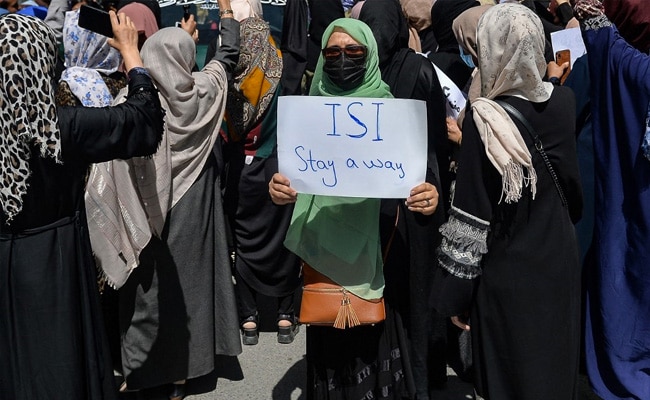 Hundreds of Kabul residents came out on the streets today in protest against what they said was meddling by Pakistan in Afghanistan’s affairs, three weeks after the Taliban’s takeover. In videos shared by local journalists on social media, the crowds were heard shouting slogans like “death to Pakistan”, “we don’t want a Pakistani puppet government” and “Pakistan, leave Afghanistan”, among others.

The Taliban fired shots into the air to disperse crowds at the protest, news agency AFP reported.

Pakistan’s spy agency Inter-Services Intelligence (ISI), which is notorious for supporting terror groups against India, is believed to be working with the Taliban and laying the groundwork for a new government in the country where a US-led alliance fought a war against terror for 20 years.

“ISI stay away,” read a placard held up by a woman at the protest outside the Pakistani embassy in the Afghan capital.

“The Islamic government is shooting at our poor people,” one panic-stricken woman on the street says over sounds of gunfire in a video clip posted on Twitter by Asvaka news agency. “These people (Taliban) are very unjust, and they are not human at all.”

Video: Hundreds of protesters demonstrated in front of Pakistan’s embassy in Kabul on Monday. They dispersed after Taliban forces fired into the air.#TOLOnewspic.twitter.com/qV2QaNgOme

ISI chief Faiz Hameed was in Kabul at the weekend, reportedly to be briefed by his country’s ambassador. But he likely met with Taliban officials too.

Today, curse of the Taliban and Pakistan are heard from all over Kabul.
In dozens points in Kabul, separate groups, mostly young men and women, have begun protesting. They are chanting “Death to Taliban” “Death to Pakistan”

The armed group has not yet announced a government, but the name of a lesser known Taliban leader who is in the United Nations terror watch list, Mullah Mohammad Hassan Akhund, is doing the rounds as a compromise candidate for the next Prime Minister of Afghanistan.

Disagreements between the terrorist group’s multiple factions have so far stymied government formation in the war-torn nation. The main contenders for power include the Doha unit of the Taliban headed by Mullah Baradar, the Haqqani Network, a semi-independent terror outfit that operates in eastern Afghanistan, and the Kandahar faction of the Taliban.

There is speculation that the consensus to make Mullah Mohammad Hassan Akhund the next Prime Minister was arrived at during the Pakistan military intelligence chief’s stay in Kabul.