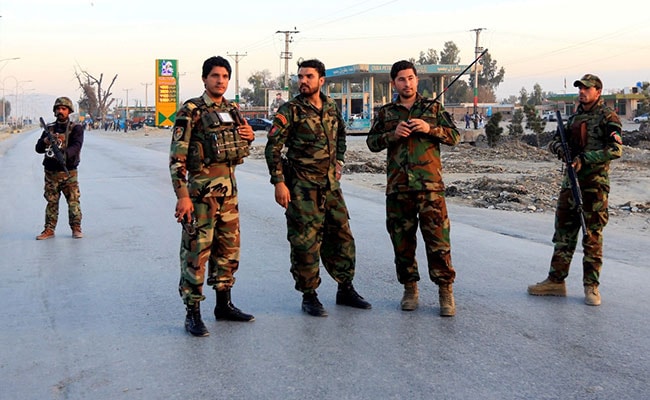 Afghan National Army officers stand guard near the site of a blast in Jalalabad, Afghanistan.

Russia said on Friday that the Taliban should be included in any Afghan interim administration, ahead of a conference in Moscow aimed at supporting peace talks between the Islamist group and Afghanistan’s government.

Moscow is set to host a conference on Afghanistan on March 18 and has invited several regional players, including Taliban representatives. It comes at a crucial time for the peace process ahead of a May 1 deadline for foreign troops to withdraw from Afghanistan.

The United States has drafted a peace plan calling for the current Afghan government to be replaced with an interim administration until a new constitution is agreed and elections held, but Afghan President Ashraf Ghani has refused to step aside for a transitional government.

“The formation of an interim coalition government should be decided by the Afghans themselves during national reconciliation negotiations,” Russian Foreign Ministry spokeswoman Maria Zakharova told reporters at her weekly briefing.

“At the same time we have noted that the formation of an interim, inclusive administration would be a logical solution to the problem of integrating the Taliban into Afghanistan’s peaceful political life.”

The US-drafted peace plans suggests that under the interim Afghan administration, the national parliament could either be expanded to include members of the Taliban or suspended until after the election.

Moscow has said its conference next week is meant to support peace talks held in Doha, which have struggled to yield any breakthroughs.

A source close to the Taliban told Reuters on condition of anonymity that a team of four or five members of the Taliban’s political office in Doha would attend the Moscow conference.

Earlier on Friday, Turkey said it would also host Afghan peace talks in April in Istanbul.