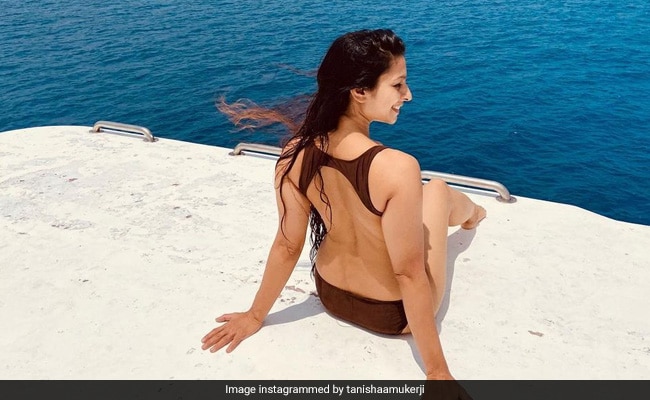 Tanishaa Mukerji’s “meditative” space is a scenic view – the ocean to be precise. The actress, on Sunday, shared a stunning shot of herself, in which she can be seen facing the ocean, dressed in a brown swimsuit and with a smile on her face. She summed up the essence of the picture with these words: “Coming back to life… The ocean rejuvenates me! There is nothing more soothing than staring off into the ocean and listening to the sound of the waves! It’s meditative for me.” Water baby Tanishaa Mukerji loves to share posts from her happy place. Posting another shot a few days ago, the actress wrote: “My moment in the sun.” She added the hashtags #oceanlife, #boatlife, #diving, #freedom, #liveaboard, #searose and #energyiseverything.

Take a look at the pictures shared by Tanishaa Mukerji here:

Earlier this month, Tanishaa shared a post from a planting drive, where she was accompanied by her mother and veteran actress Tanuja. “Friday feels like planting day! Go plant a tree! Just go,” Tanishaa captioned the post.

Tanishaa Mukerji stepped into Bollywood with the 2003 film Sssshhh… She later starred in films such as Popcorn Khao! Mast Ho Jao, Tango Charlie and Neal ‘N’ Nikki among others. She also participated in reality TV shows such as Bigg Boss 7 and Fear Factor: Khatron Ke Khiladi 7.

Tanishaa and Kajol’s mother Tanuja is a veteran actress who has featured in some of the most iconic films in Bollywood. Her filmography includes classics like Haathi Mere Saathi, Bandish, Anokha Rishta, Jewel Thief, Jeene Ki Raah, Suhaagan, Swarg Narak and Anubhav to name a few.