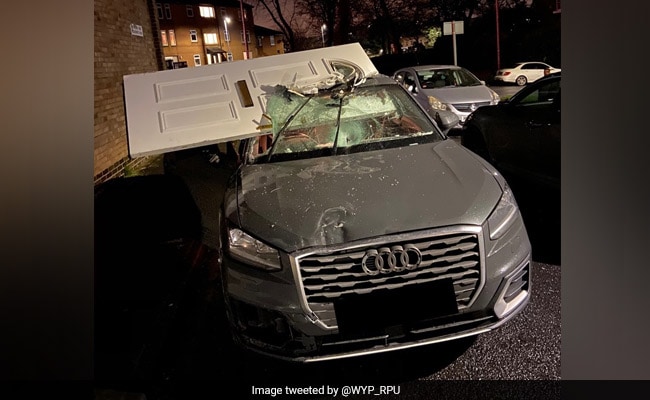 An Audi driver drove off with a front door wedged in his car’s windshield.

A teenaged driver in the UK was arrested after he crashed into a house and drove off with the front door. According to West Yorkshire Police, the 18-year-old collided with another car before crashing into the front porch of a house in Dewsbury, West Yorkshire on Friday night.

Despite the front door of the house getting wedged into his Audi’s windshield, the unnamed teen managed to flee the scene – taking the door with him.

“Driver collided with a vehicle, then the front porch of a house – before then continuing to drive for several metres with front door attached to car,” West Yorkshire Police said while releasing a picture of the wrecked Audi with the white front door lodged in its windshield and roof.

Ashworth Rd, Dewsbury – Driver collided with a vehicle, then the front porch of a house – before then continuing to drive for several metres with front door attached to car. Driver arrested suspected unfit through drink/drugs. #wypthecost#fatal4pic.twitter.com/ee8r9ZZc9A

The motorist was arrested on suspicion of being unfit to drive due to drink or drugs.

Meanwhile, the bizarre incident sparked a slew of amused reactions on the microblogging platform.

“I’ve heard of a sun roof, but never a sun door!” another joked.

The driver was not seriously injured. A spokesperson for the police told Sky News he was taken to the hospital for head injuries but is not thought to have been seriously hurt.

Earlier this week, another bizarre car accident had gone viral on social media. Footage of a Porsche careening over a wall and landing on top of another car had been widely circulated online.