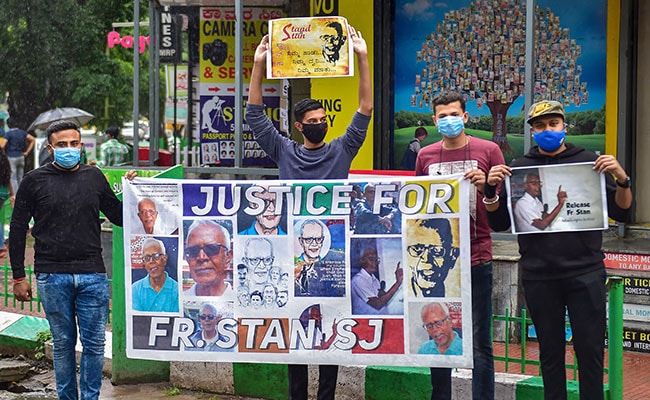 Father Stan Swamy, the 83-year-old tribal rights activist who suffers from Parkinson’s disease and was arrested last month over his alleged involvement in the Bhima-Koregaon case, couldn’t get a straw and sipper for around four weeks because the National Investigation Agency (NIA) didn’t have them, the agency has said.

In a 473-word news release divided into 10 points, the agency on Sunday said it never confiscated Mr Swamy’s straw and sipper during his arrest nearly two months ago. “NIA had conducted his personal search in presence of independent witnesses and no such straw and sipper were found,” it said.

“As the accused was in judicial custody, the matter was between him and the jail authorities which come under the Maharashtra State Administration,” the agency said.

Claims Made by Accused Stan Swamy regarding Seizure of his Straw and Sipper by NIA are False and Mischievous pic.twitter.com/9Xsb3rjukR

For more than four weeks, Stan Swamy had been asking for a sipper and straw citing Parkison’s disease, which is a debilitating disorder of the central nervous system that can cause involuntary tremors, or muscular spasms, which makes carrying out even everyday actions, such as drinking, difficult. Some patients also develop problems swallowing or chewing.

Following Mr Swamy filed the request in court on November 6, the counsel for the NIA sought time to consult the investigators in the case. Twenty days later, he informed the court that the agency never had the straw and sipper.

After the agency’s response, the special court rejected Stan Swamy’s application and the activist had to move a fresh application seeking permission to use a straw and a sipper and winter clothes inside the jail. The court sought the response of the jail authorities and adjourned the matter till December 4.

“We know he is a patient, he suffers from Parkinson’s disease. Why would we not provide him things which he requires,” the official said.

In his first application, Mr Swamy, who has been at Maharashtra’s Taloja Central Jail for nearly two months now, had said, “I cannot hold a glass as my hands are unsteady due to Parkinson’s.”

Late last month a special NIA court rejected Mr Swamy’s bail application, which had been filed on medical grounds, declaring that the octogenarian had been booked under the stringent UAPA (Unlawful Activities (Prevention) Act) and was therefore not allowed bail.

The Bhima-Koregaon case involves the violence that erupted in the vicinity of a war memorial in the village of that name on January 1, 2018. This was allegedly after provocative speeches were made during the Elgar Parishad conclave held a day earlier at Shaniwarwada in Pune.

The NIA claims Mr Swamy is linked to CPI (Maoist) activities and had a role in instigating violence.