Tottenham forward Harry Kane took to Instagram on Friday to share a video of him showcasing his skills with a cricket bat in hand. In the video, Kane can be seen striking a tennis ball cleanly as Tottenham players try their hands at cricket. While sharing the video, Kane asked Indian cricket captain Virat Kohli if there is a place available for him in Royal Challengers Bangalore (RCB) squad for next year’s Indian Premier League. “Got a match winning T20 knock in me I reckon. Any places going for @RCBTweets in the @IPL next season @imVkohli,” Kane captioned the video on Instagram.

While Kohli, who was in action in Sydney earlier in the day, didn’t respond to Kane’s query, RCB said they’ve reserved the number 10 jersey just for him.

England wicketkeeper batsman Jos Buttler too was impressed with Tottenham striker’s cricketing abilities and asked him to get his name in the auction for IPL 2021.

“Get yourself in the @iplt20 auction,” Buttler wrote on Kane’s post. 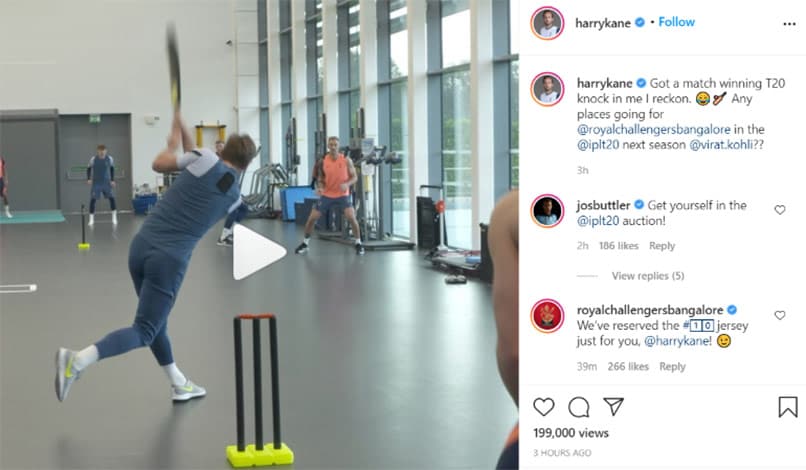 Kane has played a pivotal role in Tottenham’s success in this season in the Premier League.

The 27-year-old has seven goals to his name in this season so far and his assists have also helped Tottenham sit on the top of the Premier League table with 20 points from nine games.