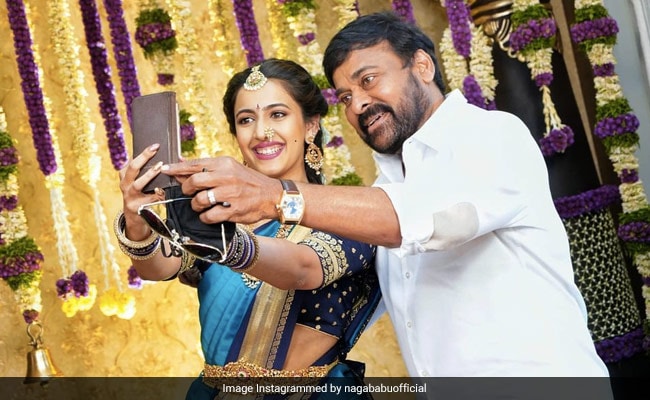 Actress-producer Niharika Konidela, who is all set to marry fiancé Chaitanya JV at Udaipur’s Udaivilas Palace (reportedly) on December 9, posted pictures from her pre-wedding ceremonies on Sunday night. The festivities, which took place at Niharika’s Hyderabad home, were attended by her uncle and superstar Chiranjeevi, and her cousins Sushmita Konidela and Sreeja Kalyan. Actor-producer Naga Babu shared pictures from his daughter’s pre-wedding festivities on social media. Posting a picture of the bride-to-be with her family, he captioned the post: “As a family, we gave you roots. As s father I gave you wings. The wings will take you high and the roots will keep you safe. The 2 best gifts your loving Daddu can offer. Love you to the moon and back.” He added the wedding hashtag #nischay to the post.

On Sunday evening, Naga Babu posted a picture of Niharika along with her uncle Chiranjeevi and he captioned the post: “His love transcends all the borders of time and age. His smile transforms every event into a celebration. The day of the bride.” Here’s the post we are talking about:

The bride-to-be posted a picture collage on her Instagram profile, which had a throwback picture of her mother Padmaja Konidela alongside a recent picture of Niharika. She wore her mother’s saree for the ceremony. “My wife looks pretty but my Niha thalli looks like an angel,” Naga Babu commented on the post.

Niharika Konidela got engaged to Hyderabad-based techie Chaitanya JV in August this year. Niharika Konidela stepped into the Indian entertainment industry as a television presenter, after which she switched to starring in web-series, which were produced by her production company Pink Elephant Pictures. She has starred in web-series like Muddapappu Avakai, Nanna Koochi and Madhouse, which she had also produced. She made her debut in films with the 2016 movie Oka Manasu. Niharika Konidela was last seen in Sye Raa Narasimha Reddy, which also featured her uncle Chiranjeevi.