Union Minister Shripad Naik was injured while his wife and close aide died after a tragic accident in Karnataka this evening. His wife and his personal secretary, Deepak, who were critical after the crash, died in the hospital, police confirmed.

Mr Naik, who is the Union Minister of state for AYUSH (independent) and defence is out of danger. He is being treated at the Goa Medical College and Hospital in Bambolim.

Dramatic visuals from the accident site shows the white Toyota car the minister was travelling in in a mangled state among bushes and trees. The car was badly damaged, photos show. 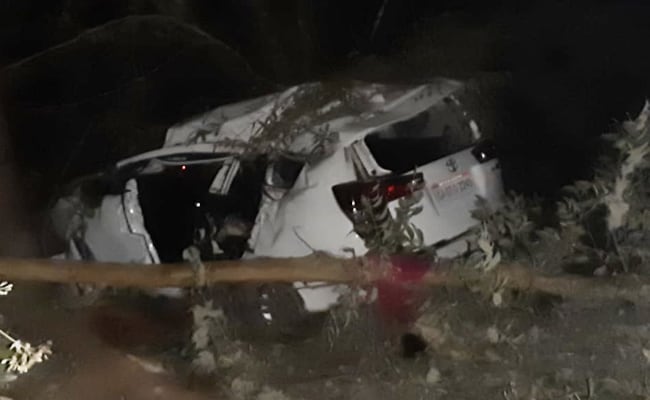 Prime Minister Narendra Modi has spoken to Goa Chief Minister Pramod Sawant to ensure proper arrangements for the treatment of Mr Naik in the state. The 68-year-old is a BJP MP from north Goa.

Shocked to know that the car which Union Minister Shripad Naik ji was travelling met with an accident in Uttara Kannada and the death of his wife. My heartfelt condolences on the tragic death of Smt Naik and prayers for the speedy recovery of Shri Naik and those injured.

“Deeply saddened to hear the news of Vijaya Naik ji’s death in an accident. Praying for the quick recovery of Hon’ble Union Minister Shripad Naik ji, hope God gives him & his family the strength to overcome this loss,” he tweeted.