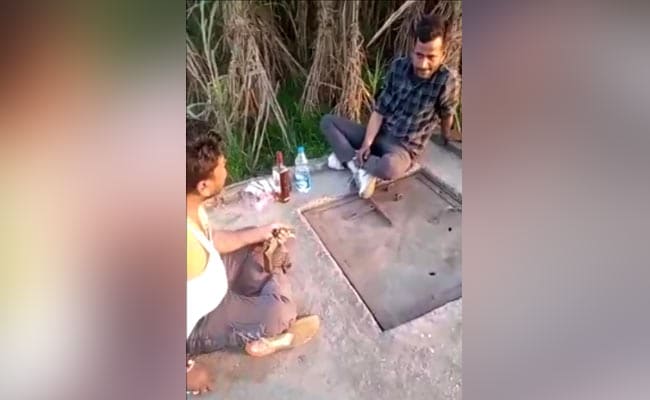 The men were drinking and chatting before one of them shot the victim, recording the video

A man casually picks up a country-made pistol, loads it with a bullet and shoots his nephew dead, visuals from a chilling video, recorded by the victim, from Uttar Pradesh’s Muzaffarnagar show. The mobile phone falls from the victim’s hand after he was shot and visuals are lost.

19-year-old Prince’s painful moans are heard in the video after he was shot even as the group he was with talk casually. Two others, apart from the victim and accused, were seen in the video (one of whose face was not visible) who were drinking and casually passing the pistol around.

The 30-second bizarre video, that has been widely shared on social media, shows the men talking and laughing before one of them shoots the victim who was recording their video.

One of the accused has been arrested, police said, although they did not specify if it was the shooter.

Reports in the local media say that the arrested person has claimed that the shooter was just “checking out” the pistol when he fired at his nephew.

The mindless murder happened two days ago. Alcohol bottles are seen lying around from what it seems is a tubewell in the middle of a farm where the group was drinking, possibly in the evening.

The Muzaffarnagar police replied with a tweet to the video of the crime saying that a case has been filed and efforts are on to arrest the other accused in the case.