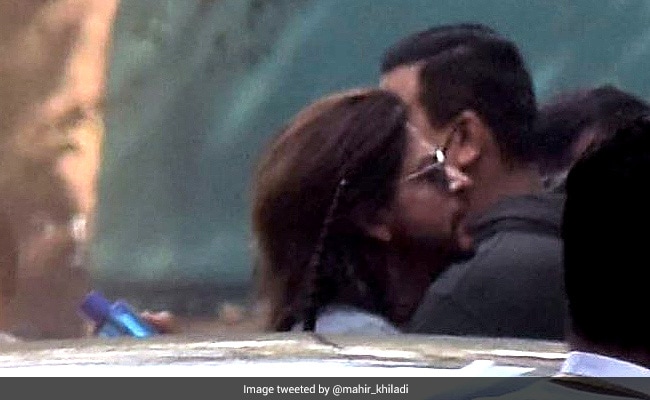 Shah Rukh Khan, who was in Dubai for the Indian Premier League, returned to Mumbai earlier this month and has busied himself with his work schedule. The 55-year-old actor was recently spotted arriving at Mumbai’s Yash Raj Films studio. The paparazzi only managed glimpses of the actor, who sported long hair with a side braid and also what appeared to be a thick French beard. Photos of Shah Rukh Khan rocking his new look have gone crazy viral on the Internet, courtesy fan-clubs. It appears that Shah Rukh has begun work on his new film Pathan, which got fans all the more excited. Shah Rukh was last seen in 2018 movie Zero and Pathan is his first film after that.

Here are some of the photos of Shah Rukh which have gone viral:

SHAH RUKH KHAN IS BACK!!! Cant wait for #Pathan!!! pic.twitter.com/JMFTNGodAe

Wuhuu super news for every SRKian and the love get be stronger then before ????❤
Aa Raha Hoon Palat Ke Main Hoon @iamsrk#Pathan
We love you ???????????? pic.twitter.com/EkRDAYDW1L

During the IPL in Dubai, Shah Rukh’s first appearance in the stands had sent the Internet into some sort of a tizzy. Twitter was floored by what they called Shah Rukh’s “new look” – he sported long hair, styled in a beanie.

Directed by Siddharth Anand, Pathan is said to be an action film and will be produced by Aditya Chopra’s Yash Raj Films. While Shah Rukh will play the titular role, actress Deepika Padukone has reportedly been roped in as his co-star. Deepika Padukone debuted in Bollywood opposite Shah Rukh Khan in 2007 film Om Shanti Om and then they co-starred Happy New Year and Chennai Express – all three films were box office hits.

Last seen in the 2018 film Zero, Shah Rukh recently produced Netflix projects such as Bard Of Blood and Class Of ’83. He will also produce the film Bob Biswas and a crime-thriller titled Love Hostel.