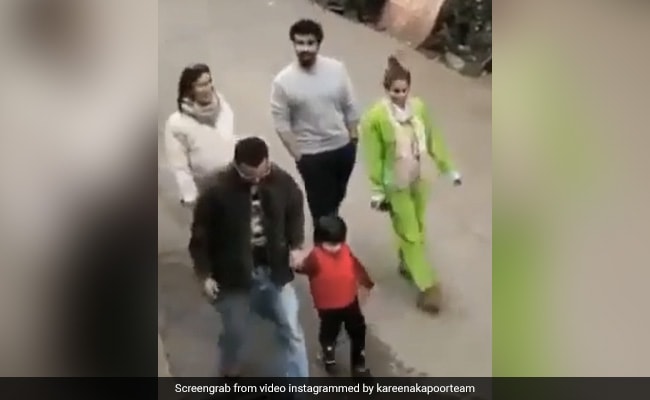 Kareena Kapoor and Saif Ali Khan’s son Taimur occupied a spot on the list of trends on Monday after a video of him shouting at crowd in Dharamshala surfaced on the Internet. Kareena flew to Himachal Pradesh last week to celebrate Diwali with Saif Ali Khan in Dharamshala, where he is currently filming Bhoot Police along with Arjun Kapoor. Malaika Arora, who is dating Arjun Kapoor, also accompanied the actress on her trip. A video of the celebs has gone crazy viral on social media, in which they can be seen taking a stroll on the roads of Dharamshala. The clip, towards the end, shows Taimur shouting, “No photo” loudly when he spots people clicking pictures of him and his parents.

The video shows Kareena Kapoor walking with Arjun and Saif walking ahead of them, holding Taimur’s hands. Malaika can be seen walking next to Saif.

Check out the viral video here:

Malaika Arora has been adding pictures to her Dharamshala diaries. On Monday, she posted a photo of herself wearing a robe and Ugg boots while posing the camera. Guess who clicked her picture? None other than Kareena Kapoor. “Robe, Ugg’s and a hot cuppa…. my kinda vibe. Pic tedha hai par achaa hai, Kareena Kapoor.”

On Sunday, she posted pictures of herself strolling in McLeod Ganj. Take a look: