India captain Virat Kohli and his wife Anushka Sharma on Monday were blessed with a daughter. Kohli took to Twitter to share the news, and said that both the baby and Anushka are both healthy. Kohli thanked fans for their love, prayers and wishes and said that he and Anushka are feeling “beyond blessed” to embark on this new chapter in their lives. Congratulations poured in from fans and the sports fraternity for the celebrity couple.

“Big congratulations to both of you,” former India cricketer Irfan Pathan tweeted.

“Congratulations both of u,” badminton star Saina Nehwal wrote.

Big congratulations to both of you

Congratulations both of u

“Many congratulations to you both, Virat,” the official account of the Lord’s Cricket Ground tweeted.

Kohli shared the same message on Instagram and wishes poured in there too. His India and Royal Challengers Bangalore teammate Yuzvendra Chahal and his wife Dhanashree Verma both congratulated him, while Indian Premier League team Mumbai Indians also wished the couple. 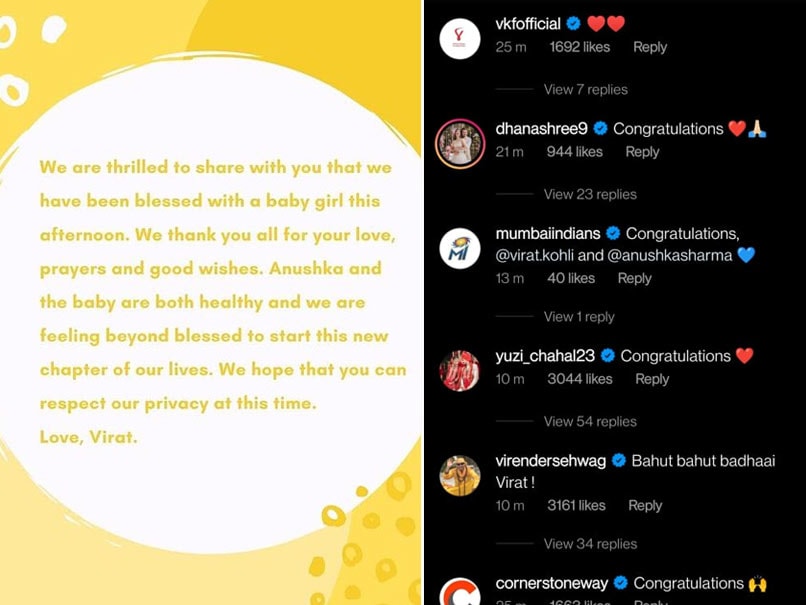 Congratulations poured in for Virat Kohli and Anushka Sharma on Instagram.

Kohli and Anushka got married in 2017 and had announced last August that they were expecting their first child this January.

Kohli was in Australia for India’s tour Down Under, but flew home after the first Test in Adelaide, with the Board of Cricket Control in India having granted him paternity leave.