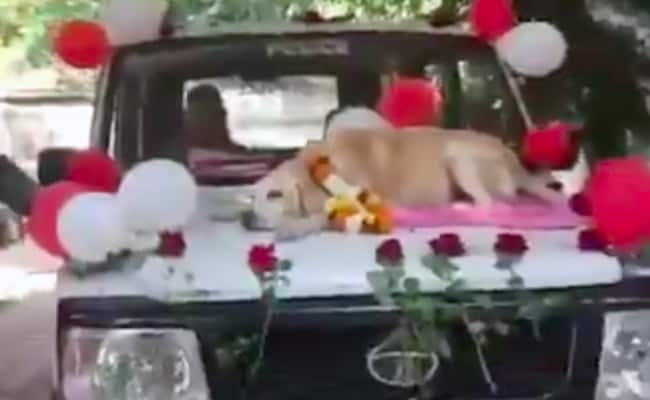 A sniffer dog received a warm farewell after 11 years of meritorious service.

Maharashtra Home Minister Anil Deshmukh led the tributes online by tweeting a video of ‘Sniffer Spike’, who was paraded on the bonnet of a police vehicle, decorated with balloons and roses. Police personnel walked alongside the vehicle applauding Spike for his contributions over the years.

Mr Deshmuk said: “He was not just a canine but had become a part of police family. I salute him for his service towards the Nation!”

.@nashikpolice organized special farewell for ‘Sniffer Spike’ canine who retired after 11yrs of meritorious service, contributing immensely in detecting explosives. He was not just a canine but had become a part of police family. I salute him for his service towards the Nation!

Sniffer dogs undergo intense training from a young age before they are inducted into the police force. In fact, they form a close bond with their handlers who raise them from the time they were puppies.

Recently, the army began training dogs to detect COVID-19 in its ranks by sniffing human sweat and urine.

Breeds such as cocker spaniels and labradors are being trained to detect the disease from the cells of infected people at a facility in Delhi, according to a report.

Several countries are considering using dogs to identify the coronavirus at airports and other public spaces. But the military deployment is the first time in India that dogs are being used to detect COVID-19, said Colonel Surender Saini, an army dog trainer.

At least eight dogs were being trained to be deployed to a transit camp in northern India, from where troops move to high security border areas.

Dogs would allow quicker detection of the disease and reduce the need for tests in remote locations.