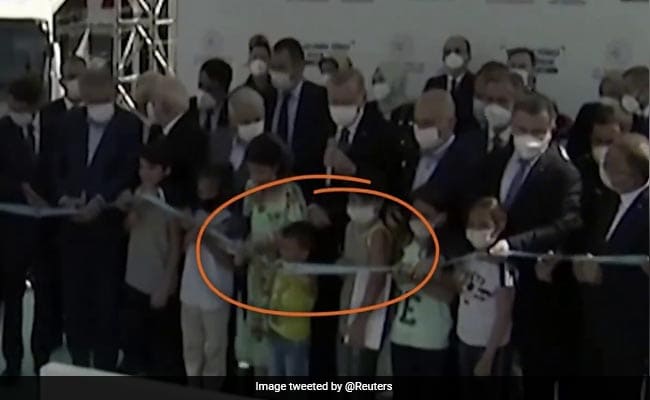 A little boy stole the show at an inauguration ceremony.

A boy at a ceremony in Turkey took a short route to fame. This boy was a part of the opening ceremony of a highway tunnel in Turkey which was to be inaugurated by the country’s president Recep Tayyip Erdogan. However, before Mr Erdogan initiated the ceremony, the boy got impatient and cut the ribbon with a pair of scissors in his hand. And, as expected, the video went viral on social media. In the clip, a group of children stand before Mr Erdogan and other officials on a stage. While the announcements are being made from one side of the stage, a boy standing right in front of Mr Erdogan cuts the ribbon. After realising his mistake, he tries to cover it up by holding the ribbon in place.

Soon Mr Erdogan taps on the boy’s head and talks to him. After the ceremony, the president gets into a talk with the children around him and also exchanges some high fives. The video has been viewed more than 2.6 Lakh times.

A boy cut a ribbon during the opening ceremony for a highway tunnel in Turkey. That wasn’t such a big deal in itself, but that job had been reserved for Turkey’s president Tayyip Erdogan pic.twitter.com/dk0cNj3Yrp

Most of them were happy to see the unexpected turn of events at the hands of a kid. “The highway tunnel inaugurated by the future of the country by his tiny hands… All’s well that ends well,” wrote a person.

The highway tunnel inaugurated by the future of the country by his tiny hands..All’s well that ends well 🙂

Some were amused at the child’s mischief.

Then, we have this user who came up with a clarification on behalf of the kid. “This kid didn’t steal the show because this job wasn’t reserved for Mr Erdogan. The kids are supposed to cut the ribbon, several of them have scissors in their hands. This particular kid was just too early and didn’t cut it together with the other kids,” he wrote.

This kid didn’t steal the show because this job wasn’t reserved for Erdoğan. The kids are supposed to cut the ribbon, several of them have scissors in their hand. This particular kid was just too early and didn’t cut it together with the other kids.

“Erdogan to the little guy: catch me outside, how bout that,” read one of the comments.

Erdogan to little guy: catch me outside, how bout that

What do you have to say about this event?