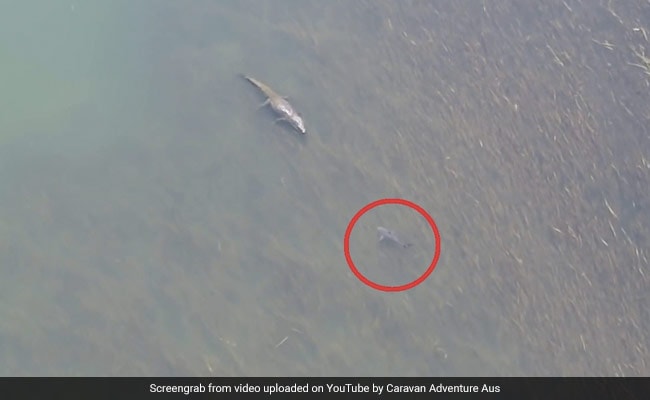 When a monster croc faced off a bull shark in Australia.

Shocking drone footage shows the moment that a bull shark came face to face with a monster crocodile in Australia. Chelsea and Bryce were fishing near Ivanhoe Crossing in Kununurra when they set up their drone camera in hopes of seeing what lurked in the murky waters, reports the Daily Mail.

Their drone captured a bull shark just a few feet away from the monster saltwater crocodile. According to Newsweek, the crocodile measured a whopping 16 feet, easily dwarfing the shark.

Footage that has gone viral on social media shows the two predators face to face for a few seconds. As the croc remained motionless, the shark inched closer before seemingly deciding against a fight and changing its direction. Watch the video below:

The video has been viewed over 1.6 lakh times on YouTube. Although it was filmed last month, it began to gain viral attention only recently after it was re-posted across a number of social media platforms.

“Wow that’s a big one! Shark saw sense and swam off!” wrote one person in the comments section.

“Godzilla… is that you?” another asked.

“I think this was a rare sighing but probably good for people to see what’s lurking around the waters in the Kimberley Region,” said Chelsea to the Daily Mail.

“We didn’t realise crocodiles or sharks were in the area as locals are always in the water.”