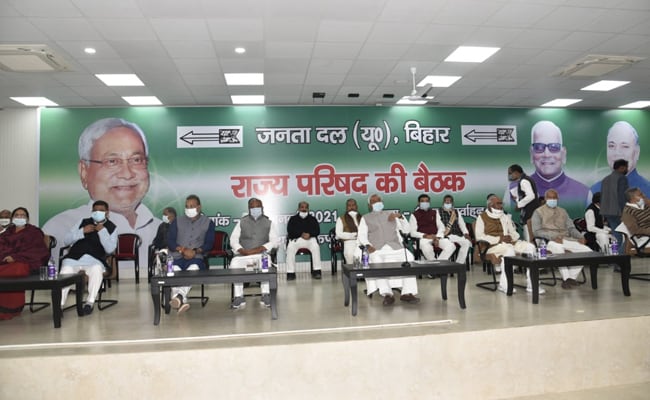 Amid reports of rifts between the BJP and the Janata Dal United – senior members of Bihar’s ruling alliance, there were signs of a truce on Sunday after Chief Minister Nitish Kumar’s party – the JDU – indicated it did not want to escalate matters any further.

At the end of a two-day meeting of the JDU state executive, Lalan Singh, who is the party’s leader in the Lok Sabha, told reporters “we are with the (BJP-led) NDA”. He dismissed rumours suggesting a further breakdown of what was a fragile relationship in the run-up to November elections, in which the BJP claimed 74 seats to the JDU’s 43 to emerge as the stronger of the two parties.

“In the last two days, as the party was meeting, there was a lot of speculation. We want to make it clear… we are with the NDA. During the meeting we realised that although our seat share had been reduced, our vote share had not. We will strengthen the party,” Mr Singh said.

Mr Singh also confirmed senior leader Umesh Kushwaha had been unanimously elected the chief of the party’s state unit, and that the JDU would work to fulfill Nitish Kumar’s seven poll promises.

The declaration of goodwill, though, was in contrast to outbursts by several JDU leaders who lost seats in last year’s Assembly election; many openly accused the BJP of backstabbing its ally.

Nitish Kumar himself launched an indirect attack on Saturday, claiming his party struggled to win seats because of delayed seat-sharing talks between the two parties. He said the JDU had “paid a big price” and that “false propaganda was spread against my party” – a veiled reference to LJP chief Chirag Paswan, who many saw as the election’s ‘x-factor’.

Nevertheless, it appears the party has, for now at least, decided on repairing its ties with the BJP.

“We must strive to work for all those who voted for us as well as those who did not. I urge candidates who lost to devote themselves to serving the people with gusto,” Mr Kumar said Saturday.

The opposition, though, has a different take on the matter.

RJD chief Tejashwi Yadav, who very nearly led his party (and the mahagathbandhan) to power, said Nitish Kumar was a “bargainer” and was only “blackmailing” his ally.

“If you look at Nitishji‘s past… whether it is George Fernandes, Congress or our party.. who hasn’t he deceived? What goes around comes around. He is hungry for power. He is a bargainer… a blackmailer who has done huge damage to Bihar. He is not a leader,” Mr Yadav declared.

Ties between Nitish Kumar and Tejashwi Yadav have been icy since the former ditched the RJD and Congress to go back to the BJP two years after they swept the 2015 election. In campaigning for the 2020 election, Mr Yadav frequently accused Mr Kumar of being “greedy” for power.

Tejashwi Yadav single-handedly dragged the opposition alliance, which includes the Congress, to a famous win in the Assembly poll. The RJD finished with 75 seats to become the single-largest party.