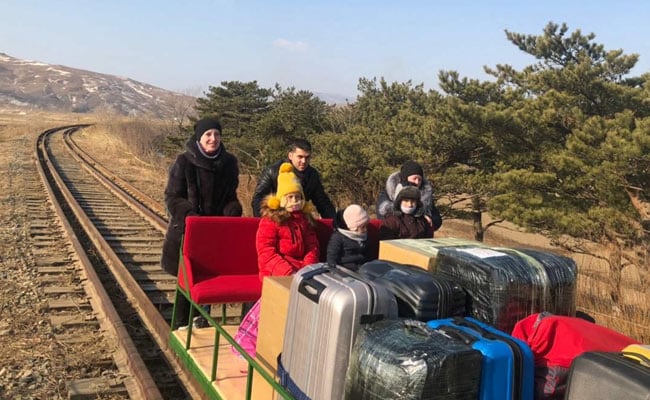 Eight Russian diplomats and family members — the youngest of them a three-year-old girl — have arrived home from North Korea on a hand-pushed rail trolley due to Pyongyang’s coronavirus restrictions.

Video posted on Russia’s foreign ministry’s verified Telegram account showed the trolley, laden with suitcases and women, being pushed across a border railway bridge by Third Secretary Vladislav Sorokin, the only man in the group.

They waved and cheered as they approached their homeland, the culmination of an expedition that began with a 32-hour train trip from Pyongyang, followed by a two-hour bus ride to the border.

“It took a long and difficult journey to get home,” the ministry said in the post late Thursday, speaking of the final stretch.

“To do this, you need to make a trolley in advance, put it on the rails, place things on it, seat the children — and go,” it said.

“Finally, the most important part of the route — walking on foot to the Russian side.”

Sorokin was “the main ‘engine’ of the non-self-propelled railcar”, it said, and had to push it for more than a kilometre.

Once on Russian territory, they were met by foreign ministry colleagues and were taken by bus to Vladivostok airport.

“Don’t leave your own behind”, the ministry added as a hashtag.

North Korea imposed a strict border shutdown in January last year to try to protect itself from the coronavirus that first emerged in neighbouring China and has gone on to sweep the world.

The shutdown has cancelled all flights in or out of the nuclear-armed, sanctions-hit country, and cross-border trains.

With staff and supplies unable to enter, the restrictions have severely hampered the activities of diplomats and aid workers, and several Western embassies have pulled out their entire staff.

But Russia has close relations with the North and maintains a significant diplomatic presence.

On Friday, the Kremlin said the journey out of North Korea demonstrated that diplomatic service is no walk in the park.

“It seems very pleasant and elegant but in reality this is very complex, rigorous and demanding work,” Kremlin spokesman Dmitry Peskov, himself a trained diplomat, told reporters.

Stalin’s Soviet Union played a key role in the North’s foundation after it and the US decided to split the peninsula into two zones either side of the 38th parallel following the World War II surrender of Korea’s colonial overlord Japan.

Moscow still has a grand embassy in a prime spot in central Pyongyang, close to the North Korean leadership compound.

In South Korea, people online reacted gleefully to reports of how the diplomats departed.

“I am glad I was not born in North Korea,” one posted on South Korea’s biggest internet portal Naver.

Another joked: “Please return your cart to where you found it.”