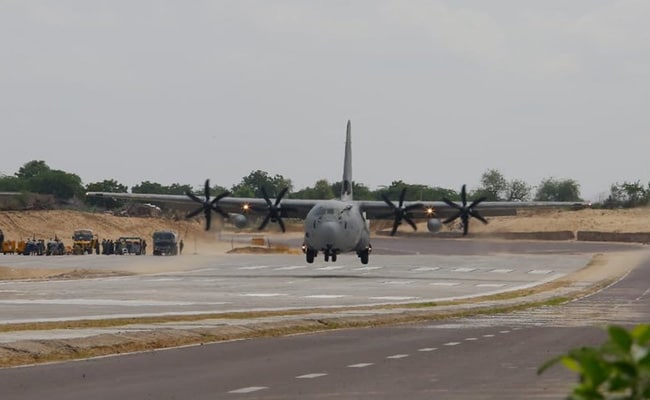 The landing strip in Rajasthan’s Barmer will be used for emergency landing of IAF aircraft.

The country’s first emergency landing strip for IAF planes built on a national highway in Rajasthan, was opened by Union ministers Rajnath Singh and Nitin Gadkari today. The strip in Barmer – built over a period of 19 months — will be used for emergency landing of IAF aircraft.  Mr Gadkari, however, promised that in future, such landing strips will be built in a matter of days.

“Yesterday, when the Honourable IAF Chief came to me, he told me that it took 1.5 years to develop this landing strip (in Barmer),” Mr Gadkari said in his speech at the inauguration.  “Then I told him that we would develop good quality landing strips for you within 15 days instead of 1.5 years,” he added.

“Whenever an out-of-the-box idea is proposed, apprehensions emerge. But (we are) glad for the support from the Defence Ministry and Air Force that has led to the successful launch of this 3-km-long road-cum-air strip,” the minister added.

A Hercules C-130J plane of the IAF, carrying the two ministers and Chief of Defence Staff Bipin Rawat, conducted a mock emergency landing on the landing strip at Satta-Gandhav stretch on National Highway 925.

The emergency landing strip, he said, will be helpful not only during a war but also during the times of natural calamities.

The minister congratulated the IAF, the National Highways Authority and the private sector for completing the construction of Emergency Landing Field in 19 months despite the Covid-19 restrictions.

“It is a great example of coordination among multiple departments and ministries, the government and private sector,” he added.

A military transport aircraft and a Mi-17v5 helicopter of the IAF also landed on the strip, showing its complete operational readiness to act as an auxiliary military airbase.