“Will Raise It When Required”: Government On Oxford Student Row – Unblendednews
Skip to content
Trending Stories 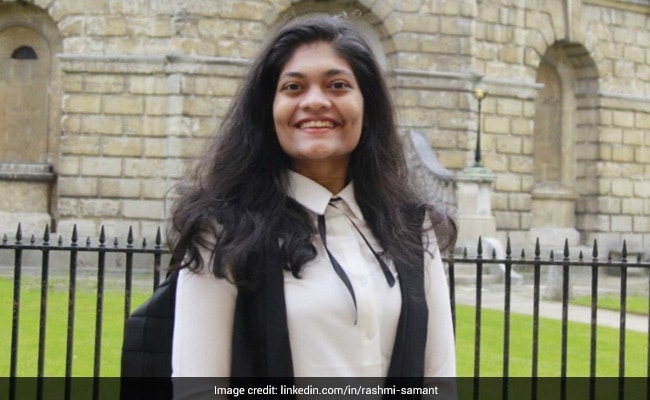 Rashmi Samant, 22, is from Karnataka’s Udupi.

India “can never ever turn our eyes away from racism”, Foreign Minister Dr. S Jaishankar said in parliament today after a BJP leader raised the topic of Rashmi Samant, the Indian student who resigned as the president of the Oxford University’s student union last month after controversy over some of her past remarks and references which were branded as “racist” and “insensitive”. The minister said India will raise such matters with Britain “when required”.

Ashwini Vaishnav, a BJP Rajya Sabha member from Odisha, told the Foreign Minister in the upper house: “I want to bring the attention of the House to a shared global concern about racism. There appears to be a continuation of attitudes and prejudices from the colonial era especially in UK.”

He pointed out that Ms Samant, 22, was the first Indian woman to be elected as the president of the univeristy’s student’s body.

“Her diversity should have been celebrated but instead of that she was cyberbullied to the point that she had to resign and even the Hindu religious beliefs of her parents were publicly attacked by a faculty member and that also went unpunished. If this is the kind of treatment that happens at the highest institute like Oxford what is the message that goes out to the world?” Mr Vaishnav said.

Soon after her election to the Oxford student union, Rashmi Samant, who is from Karnataka’s Udupi, was criticised for some of her social media posts. These included a holocaust reference on a post during a visit to the Berlin Holocaust Memorial in Germany in 2017 and an Instagram caption on a picture of herself in Malaysia that read “Ching Chang”, which upset Chinese students.

She was also criticised for a campaign post caption that separated women and trans women, with the Oxford LGBTQ+ campaign calling for her resignation.

Responding to the Rajya Sabha member, Mr Jaishankar said, “As land of Mahatma Gandhi, we can never ever turn our eyes away from racism. Particularly so when it is in a country where we have such a large diaspora. We’ve strong ties with the UK. We’ll take up such matters with great candour when required.

“We will monitor these developments very very closely. We will raise it when required and we will always champion the fight against racism and other forms of intolerance.”

Ms Samant, a graduate student reading for an MSc in energy systems at Linacre College at Oxford University, scored a landslide win in the Oxford student union election. She left for India amid the escalating row.

“In light of the recent events surrounding my election to the Presidency of the Oxford SU, I believe it is best for me to step down from the role. It has been an honour to be your President-elect,” she said in a statement on Facebook last month, later published in ‘The Oxford Student”.