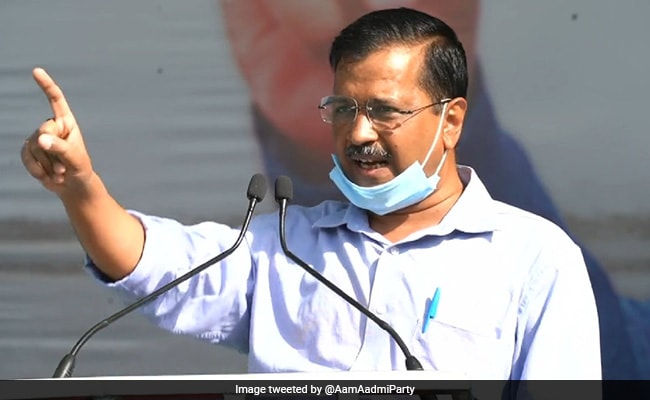 Delhi is the only “state” which has a “surplus” budget, Arvind Kejriwal said (File)

Delhi Chief Minister Arvind Kejriwal on Friday hit out at opposition parties for opposing the Delhi government’s decision to unfurl the tricolour across the city, asking “will it be hoisted in Pakistan if not in India”.

Addressing the Delhi Assembly, he said there should be no politics over patriotism and the country belongs to all.

“In the budget, we announced that we will unfurl the tricolour at 500 places across the city. Whenever we see the national flag, we are reminded of the soldier fighting at the borders. I fail to understand why the BJP and the Congress have been opposing the decision,” Mr Kejriwal asked.

“They should support and appreciate the decision. There should be no politics over patriotism. The country belongs to all… I want to ask the BJP – will the tricolour (national flag) be hoisted in Pakistan if not in India,” he said.

Mr Kejriwal said the opposition parties were mocking the Delhi government for its announcement to bid for the 2048 Olympic Games and increasing the per capita income to Singapore’s level by 2047.

“We will achieve it… We will approach the Centre and the India Olympic Association to bid for the Olympics. We all will do it together,” he said.

The Chief Minister also said almost all states and the Centre presented a “deficit” budget in the last one-and-a-half months, but Delhi is the only “state” which has a “surplus” budget in these difficult times.

Mr Kejriwal also alleged that the Congress and the BJP are opposing his government’s announcement to send the elderly to Ayodhya when Ram temple is ready.