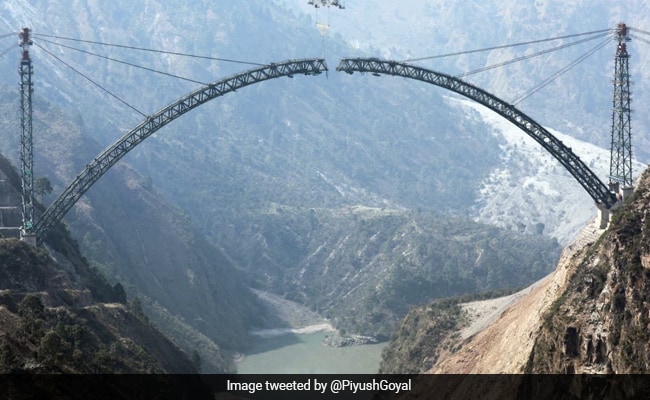 Railway officials termed the development of the Chenab Bridge a “historic” one.

In a historic moment, the railways has connected the two ends of the main arch of the world’s highest bridge on the Chenab river in Jammu and Kashmir’s Reasi district which will provide direct connectivity to Kashmir Valley.

The iconic bridge will soar 359 metres above the bed of the river and will be 30 metres higher than the iconic Eiffel Tower in Paris.

Railway officials termed the development a “historic” one.

“In a historic moment, the arch bottom of the Chenab bridge has been completed today. Next, the arch upper of the engineering marvel in making will be completed,” he said.

The minister, who also shared a video of the achievement, had said it was set to become the world’s highest railway bridge.

In a historic moment, the arch bottom of the Chenab bridge ? has been completed today. Next, the arch upper of the engineering marvel in making will be completed.

It is all set to be the world’s highest Railway bridge. pic.twitter.com/dqwN5N2HTE

Facing grave challenges and life-threatening hazards posed by rough terrain and geological thrust zones, engineers and workers are toiling overtime to meet the last extended deadline set for completion of the world’s highest railway bridge connecting Kashmir with the rest of the country.

The Northern Railway will be completing the most difficult 111-kilometre long section of the Udhampur-Srinagar-Baramulla rail link by December 2022 which would connect Kashmir to the rest of India through the railway network, officials said.

The 272 km railway line is being undertaken at an estimated cost of Rs 28,000 crore by the Northern Railway.

The first section connecting Udhampur to Katra and the third section between Banihal and Baramulla have been completed with both sections operational.

The work to complete the most difficult Katra-Banihal section is going as per schedule, they said.

The last remaining section, the 111 km Katra-Banihal section is currently under execution, officials said, adding that 126 km out of 174 km of tunnels on this section has already been completed.

They said the project is, perhaps, the most difficult new railway line project undertaken in the entire Indian subcontinent.

The terrain passes through young Himalayas, which are full of geological surprises and numerous problems. For execution purposes, the project has been divided into three sub-sections, they said.

Katra-Qazigund leg, the most difficult stretch of the project, and its alignment of this stretch which is 129 km long, passes through Patni and Pir Panjal ranges, they said.

The Udhampur-Srinagar-Baramulla rail project is highly essential to provide an alternative and reliable transportation system to Jammu and Kashmir to join Kashmir Valley to the Indian Railways network, the officials said.

They said that in view of the importance of this project in providing seamless and hassle-free connectivity in Jammu and Kashmir, the project was declared as a national project in 2002.

Prime Minister Narendra Modi had in November last year took stock of the progress of the ambitious Udhampur-Baramulla rail link project and gave explicit instructions to expedite the work and complete it by 2020.