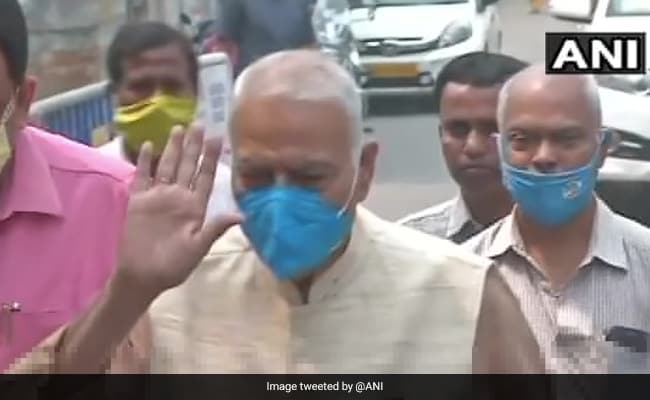 Yashwant Sinha joined his new party at the Trinamool Bhawan in Kolkata.

Yashwant Sinha, former Union Finance Minister under Prime Minister Atal Bihari Vajpayee, today joined the Trinamool Congress weeks ahead of the West Bengal Assembly election. The 83-year-old former senior BJP leader had quit his party in 2018. His joining the Chief Minister Mamata Banerjee-led party is likely to be viewed as a prize catch for an outfit that has seen a steady outflow of both leaders and cadres in the past few months.

Mr Sinha joined his new party a little after noon at the Trinamool Bhawan in Kolkata in the presence of Derek O Brien, Sudip Bandopadhyay and Subrata Mukherjee. Speaking about the developement, Mr Mukherjee said: “We are proud to have Yashwant Sinha joining us.”

The senior leader met Ms Banerjee at her residence before joining the party. Speaking at the event, he said, “The country was at a crossroads. The values we believed in are in peril. Institutions are being weakened including the judiciary…This is a serious fight across the country. It’s not just a political fight, it’s a fight to save democracy.”

He raised several issues today at the press meet, including the ongoing farmers’ agitation and the border situation with China. He also sought to draw a comparison between the Narendra Modi government and that of his former boss, PM Vajpayee.

In the run up to the Bengal polls, the Trinamool has seen a steady stream of leaders such as Suvendu Adhikari and Rajib Banerjee shifting loyalties to the BJP, a party keen on replacing Ms Banerjee’s regime. Mr Sinha’s entry into the party at this juncture helps Bengal’s ruling regime hold up an example, at least symbolically, of these defections being a two-way street.

Mr Sinha first became Finance Minister in November 1990 and stayed in office till June 1991, serving under Prime Minister Chandra Shekhar. His second tenure stretched between December 1998 and July 2002 under PM Vajpayee. From then to May 2004, he was India’s Foreign Minister.

Mr Sinha, a former IAS officer of the 1960 batch, joined politics in 1984, starting off with the Janata Party after quitting government service. He later joined the BJP.

His son Jayant Sinha remains a BJP member and Parliamentarian from Hazaribagh (Jharkhand). Although a Minister of State for Civil Aviation and Finance under Prime Minister Narendra Modi is first term (2014-19), he was given no ministerial responsibilities following re-election in 2019.

With a generational change overtaking the BJP in the middle of the last decade, Mr Sinha was perceived to have been sidelined. He soon turned a vocal critic of Prime Minister Narendra Modi and later quit the party.