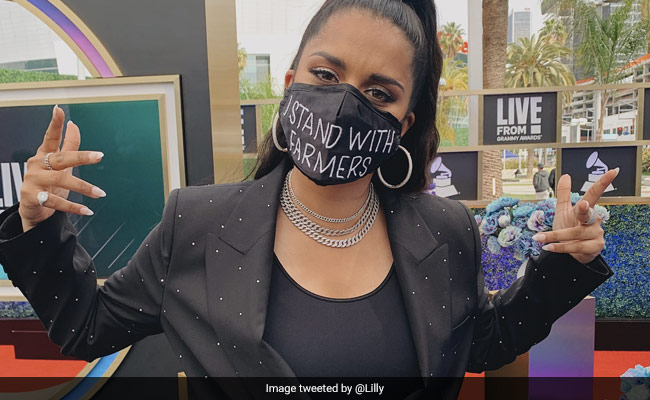 Grammy 2021: Lilly Singh wore a mask with a message: “I stand with farmers”.

YouTuber and content creator Lilly Singh made a statement at the Grammy Award ceremony by wearing mask that showed her support for the farmer’ protest in India. Ms Singh, who has been vocal about her support for the protesting farmers, posed in a mask with a message: “I stand with farmers”.

“I know red carpet/award show pictures always get the most coverage, so here you go media. Feel free to run with it. #IStandWithFarmers #GRAMMYs,” she tweeted and wrote on Instagram.

In little over an hour after she shared the photo, her Instagram post was “liked” by over 52,000 people. Model Amanda Cerny and WWE wrestler Sunil Singh were among those who commented on the post. The Canadian, whose parents were born in Punjab, has over nine million followers on Instagram and over 14 million subscribers on YouTube.

In December, in a viral TikTok clip, she urged her massive global fan base to “Stop!” and get informed about the “largest human protest in history” in India.

“I’ve been talking a lot about farmers’ protest happening in India. Long story short, farmers are protesting new agriculture bills that affect their livelihood and they have been peacefully protesting but have not met with not so peaceful responses,” Ms Singh of “Superwoman” fame had said, pledging her support to the farmers and “right to protest peacefully”.

Farmers have been protesting at Delhi’s borders for over 100 days against the center’s three agricultural laws. Even after more than 10 rounds of talks, government and farmers have not yet reached a conclusion on three farm laws, which the protesters say will leave at the mercy of corporates.

Last month, a massive controversy broke out after international pop icon Rihanna expressed solidarity with the protesting farmers. Many other celebrities, climate activist Greta Thunberg and US lawmakers followed suit, sparking a storm.

The growing international support for the farmers’ movement had prompted the government to put out a caustic statement, warning against the “temptation of sensationalist social media hashtags and comments”.