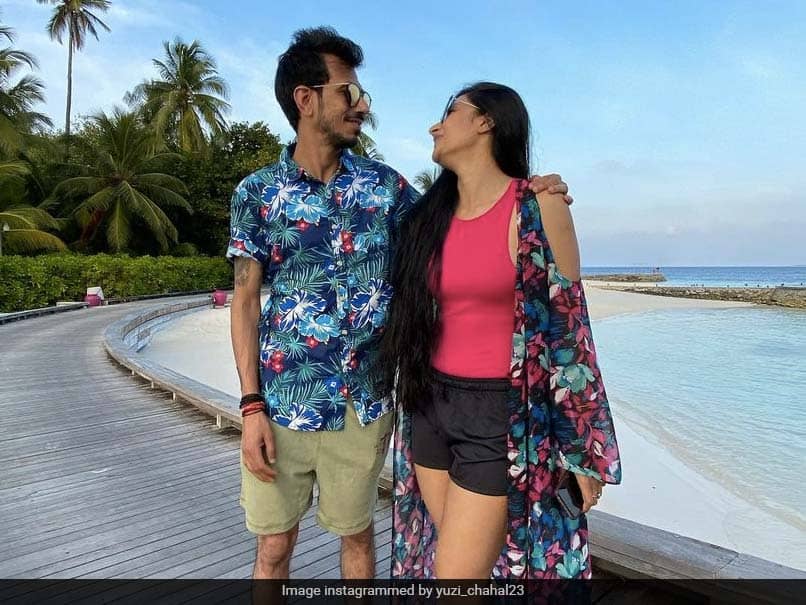 Yuzvendra Chahal and Dhanashree Verma pose for a photo in Maldives.© Instagram


India leg-spinner Yuzvendra Chahal and Dhanashree Verma, who got married in December last year, are currently vacationing in Maldives and have been keeping their fans well-updated about their trip. The duo got married on December 22, and have been hogging the attention of fans with their adorable romantic posts. The duo’s photos from their current vacation have become an instant among their fans on Instagram, who praised the chemistry between the couple. In one photo, which Chahal posted on Instagram, the couple posed on the beach with a picturesque background. He captioned it as, “Not a bad place to be lost”.

In another photo, Chahal scored some brownie points with his wife. Posting another beach photo, he used a romantic caption. “At the right place, right time with the right person”, he wrote.

Meanwhile, Dhanashree also posted some stunning pictures on her Instagram handle. In one photo, she showcased her creativity skills and captioned it as, “When you get creative in the ocean”.

Here are some other pictures:

Yuzvendra and Dhanashree got engaged in August 2020, and she also travelled to the United Arab Emirates (UAE), where the spinner played for Royal Challengers Bangalore (RCB) in the Indian Premier League (IPL) 2020.

Chahal last appeared for India in Australia, during the ODI and T20I fixtures. India lost the ODI series, but came back strongly to win the T20I series. Chahal featured in five out of the six limited-overs games in Australia. He also won the Player of the Match award in the first T20I, after coming on as a concussion substitute.