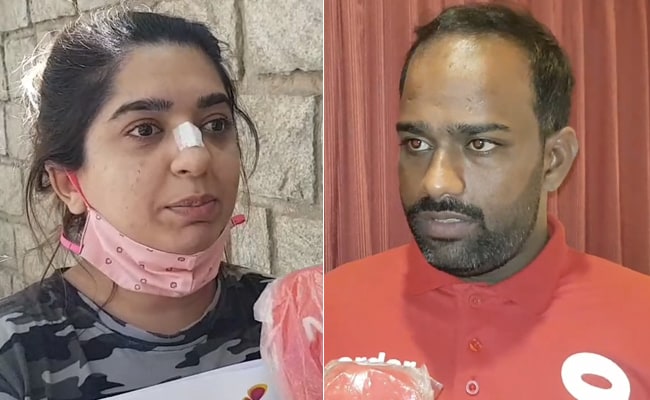 The two versions of the story have divided the social media and are now under investigation.

The Zomato delivery agent who has been accused by a Bengaluru woman of assault has filed a complaint against her, at the same police station where she had registered a case against him a few days ago.

Hitesha Chandranee, a content creator, had alleged that she was attacked by the man and shared videos showing her bleeding nose.

The accused man, Kamaraj, was arrested and released on bail and is now under temporary suspension from Zomato with a police case against him.

Ms Chandranee had said in the video that the order she had placed through Zomato was delayed. She was reportedly talking to a customer care executive about this when the delivery person “hit” her and left, leaving her bleeding.

Speaking to NDTV, Mr Kamaraj denied striking the woman and claimed it was she who had verbally abused him, thrown shoes at him and accidentally hurt herself. He also claimed he had apologized to her and, after talking to Zomato, asked her to return the food but she refused.

The woman, however, said she never started with abuses, that he was rude first. “It was my reaction out of fear. I panicked. It was in the heat of the moment, it was not intentional,” she had told NDTV.

The two versions of the story have divided the social media and are now under investigation.

After the delivery agent’s complaint, a case has been registered against the woman under various sections of the Indian Penal Code, including 341 (wrongful restraint), 355 (assault or criminal force with intent to dishonour person) and 504 (intentional insult with intent to provoke breach of the peace).

Zomato has said it is supporting both the versions, pending investigations, and wants “both sides of the story to come to light”.