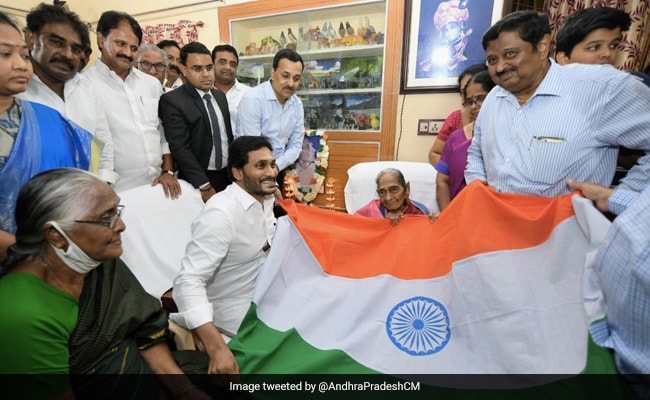 He also felicitated Ghantasala Sitamahalakshmi, daughter of late Venkaiah, marking the inauguration of the 75-week-long “Azadi Ka Amrut Mahotsav” in the state.

Pingali Venkaiah, from Krishna district, designed the National Flag and presented it to Mahatma Gandhi during his visit to Vijayawada city on April 1, 1921.

On July 22, 1947, the Constituent Assembly adopted the flag designed by Pingali Venkaiah as the National Tricolour.

“The flag designed by him came to be synonymous with the spirit of free and independent India. However, his life and works largely remain unrecognised,” the Chief Minister pointed out in the letter to the Prime Minister.

“It is in this light I request you to confer Bharat Ratna (posthumously) upon Sri Pingali Venkaiah that would not only bequeath peace on his parted soul but also fulfill the aspirations of the people of Andhra Pradesh,” Mr Reddy said.

That would be a “deserving acknowledgment” to the life and contribution of late Sri Pingali Venkaiah, the Chief Minister added.

Mr Reddy, who visited Macherla town where Sitamahalakshmi was now staying, garlanded the bust of Mahatma Gandhi and inspected a photo exhibition on the life and works of Pingali Venkaiah.

He felicitated her and other members of the family and handed over a copy of the Government Order granting an award of Rs 75 lakh while the amount was directly credited into her bank account.

Pingali Venkaiah’s daughter presented the biography of her father to the Chief Minister.

She recalled the day when her father handed over the National Flag to Mahatma Gandhi in Vijayawada. “He also introduced me to the Mahatma,” she recalled.

Earlier, Special Chief Secretary (Tourism and Culture) Rajat Bhargava interacted with Sitamahalakshmi and other members of the family and explained the various events being planned for the “Azadi Ka Amrut Mahotsav” celebrations in the state.

In the evening, Krishna district Collector A Md Imtiyaz led a rally in Vijayawada city to mark the inauguration of the event. Cultural programmes were organized in Tirupati and Visakhapatnam cities as well.