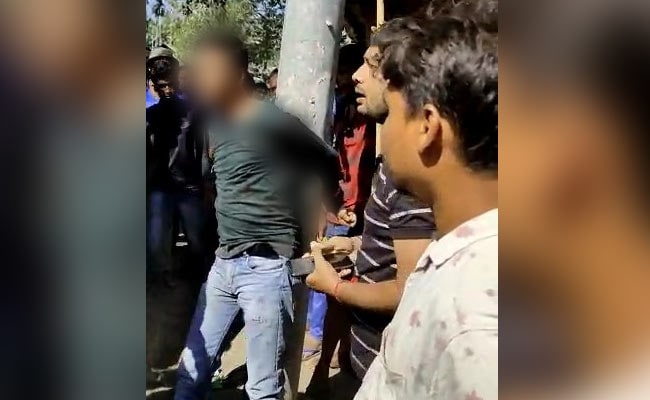 Police have said one of the accused has been arrested

Images of an Assam journalist being tied to an electricity pole and thrashed have emerged and been widely circulated online, leaving the media community in shock.

The videos and images show Milan Mahanta, a journalist from the state’s Karup district who works with leading Assamese daily Pratidin, with hands tied to the pole and being set upon by five men.

The incident reportedly took place on Sunday at Mirza, which is around 40 km west of Guwahati.

Mr Mahanta, who suffered injuries to his neck, head and ears, has filed a FIR (first information report) with the Palash Bari Police Station, in which he said his assailants were gamblers.

Milan Mahanta had recently completed a series of news reports on gambling in rural areas of Assam ahead of Diwali.

The police have arrested one person so far. Police sources said they are still searching for the others.

Mr Mahanta’s colleagues will launch a protest against his assault on Wednesday.

In the videos, as Mr Mahanta stops by a roadside shop a group of men come rushing out and surround him. He is then tied up to a nearby pole and beaten.

The young men can also be heard claiming that Mr Mahanta had demanded money from them. This allegation has been denied by his colleagues.

Local media says the attack could be the fallout of Mr Mahanta’s reporting on land mafias active in that part of the state; these mafias also run gambling rackets.