From Hyderabad to Kolkata, almost every big city in India has its trademark biryani. Bengaluru’s signature biryani has to be the Donne biryani that takes its name from the arecanut palm cups that it’s served in. Just like many other biryanis in India, this one has a fascinating back story; it might have a colonial connection. For over 200 years, since the British moved here, Bangalore has been a strategic military hub.

A while ago, I did a trail of Bengaluru’s military hotels. These eateries have been a quintessential part of the city’s foodscape since the beginning of the 20th century. There’s one theory that some of these outlets might go back as far as the 17th century when Maratha soldiers needed their meat fix. Many of the city’s old school military hotels are in the heart of ‘Old Bangalore’, areas like Cottonpet and Malleshawaram.  The city’s first recognised military hotel – SG Rao military hotel around the Cottonpet area was established by a Maratha in 1908 (S Govinda Rao Rannore). One of my stops during my trail was Shivaji Military hotel, started by another Maratha – S Mannaji Rao, in 1924.

I also stopped at another legendary military hotel that has built a cult following since the 1960s – Ranganna military hotel, and sampled their popular mutton biryani. This one’s not served in a donne but is the same mildly spiced biryani cooked with Seeraga Samba (the same small grain rice that is the star ingredient for Biryanis in Ambur and Dindigul in Tamil Nadu) that’s served in many eateries in cups made with Arecanut palm. These cups are called donne and the name stuck. It’s come to represent a style of biryani that is associated with the city. It’s essentially the military hotel biryani but it’s the packaging style – the donne, in this case, that has lent its identity to the biryani. This biryani is traditionally not as spicy as the Hyderabadi biryani; it gets its unique flavours from the short grain seeraga samba rice, generous quantity of mint leaves and the meat marination technique that also includes curd. 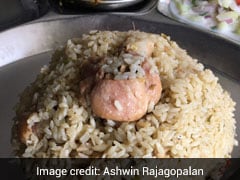 A few weeks ago I was at Caraway Kitchen, the all-day diner at Conrad Bengaluru. The Executive Chef Praveen Shetty has curated ‘Naati Ruchigalu’, a section of the buffet dedicated to local cuisine from across Karnataka. One of the most popular dishes here is the Donne biryani. Chef Praveen and his team had also visited many military hotels across the city in the quest for authentic recipes. It was inevitable that we compared notes from our respective trails. Chef Praveen adds that Shivaji Military hotel might have been the starting point for this now iconic dish. You can try Chef Praveen’s recipe at home or visit popular outlets like Chickpet donne biryani for a taste of Bengaluru’s most popular biryani.

1.  In a large bowl, combine yogurt, turmeric powder, salt and lemon juice for marination and mix the mutton pieces and marinate it for 45 minutes.

2. In a mixer-jar combine the coriander leaves, mint leaves, and green chillies, and grind to a thick fine paste along with some water. Transfer to a bowl and set aside.

3. To make the Donne Biryani, in a heavy bottomed handi or pot, heat oil and ghee on medium flame, add all the whole spices including bay leaf, cinnamon stick, cloves, cardamom and star anise, let this sizzle.

4. Once the whole spices have sizzled, add ginger and garlic paste and the sliced onions, fry until the onions turn golden brown in colour.

5. Once the ginger-garlic-onion mixture has cooked well, add in the mutton pieces along with the marinade. Cook it for 5 to 7 minutes.

7. Mix the rice and mutton masala mixture well, keep it on a slow flame.

8. Once the rice starts boiling, cover it with tight lid and keep 6-8 pieces medium sized lit charcoal on top lid so that the heat is transferred to both the sides of the handi.

9. After 20-25 minutes, open the lid to check if the meat and rice is done. If it is done, lightly fluff up the Biryani and serve hot.

The opinions expressed within this article are the personal opinions of the author. NDTV is not responsible for the accuracy, completeness, suitability, or validity of any information on this article. All information is provided on an as-is basis. The information, facts or opinions appearing in the article do not reflect the views of NDTV and NDTV does not assume any responsibility or liability for the same.

About Ashwin RajagopalanI am the proverbial slashie – a content architect, writer, speaker and cultural intelligence coach. School lunch boxes are usually the beginning of our culinary discoveries.That curiosity hasn’t waned. It’s only got stronger as I’ve explored culinary cultures, street food and fine dining restaurants across the world. I’ve discovered cultures and destinations through culinary motifs. I am equally passionate about writing on consumer tech and travel.