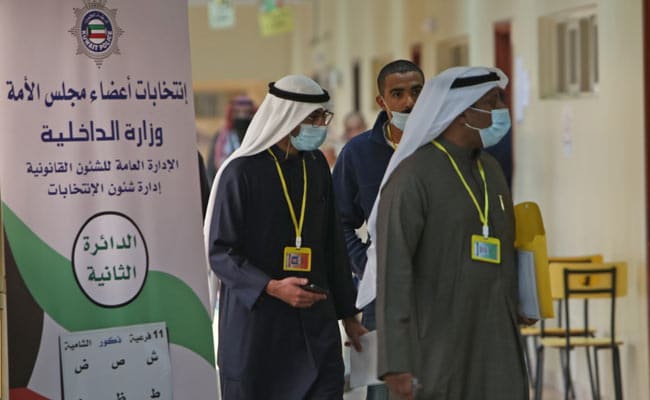 More than 567,000 Kuwaiti voters are eligible to choose among the 326 candidates. (AFP)

Kuwaitis went to the polls on Saturday in a parliamentary election overshadowed by Covid-19, with facilities laid on for citizens infected with the disease to vote in special polling stations.

The oil-rich emirate has enforced some of the strictest regulations in the Gulf to combat the spread of the virus, imposing a months-long lockdown earlier this year.

While some of those curbs have been eased, over-the-top campaign events that traditionally draw thousands for lavish banquets were absent from this year’s election, while masks remain mandatory and temperature checks are routine when venturing outdoors.

Infected people or those under mandatory quarantine are usually confined to home, with electronic wristbands monitoring their movements.

But in an effort to respect their right to vote, authorities designated five polling stations — one in each electoral district — for them to cast their ballots, among the 102 across the country.

Unlike other oil-rich Gulf states, Kuwait has a lively political life with a parliament elected for four-year terms that enjoys wide legislative powers.

Political disputes are often fought out in the open.

Parties are neither banned nor recognised, and many groups — including Islamists — operate freely as de facto parties.

But with more than 143,000 coronavirus cases to date, including 886 deaths, the election campaign has been toned down this year.

The polls, which opened at 8:00 am (0500 GMT), are the first since the new emir, Sheikh Nawaf Al-Ahmad Al-Sabah, took office in September following the death of his half-brother, Sheikh Sabah al-Ahmad Al-Sabah, at the age of 91.

But with the opposition weakened in recent years, no major political shifts are expected.

A few campaign banners hoisted over the streets have been the only physical reminder of the emirate’s political calendar.

Instead, this year’s campaign has mainly been fought on social networks and in the media.

More than 567,000 Kuwaiti voters are eligible to choose among the 326 candidates, who include 29 women.

The usual themes are a constant though, from promises to fight corruption and plans to address youth employment, to freedom of expression, housing, education and the thorny issue of the “bidoon”, Kuwait’s stateless minority.

From 2009 to 2013, and especially after the Arab Spring revolts of 2011, the country went through a period of political turmoil, with parliament and cabinets dissolved several times amid disputes between lawmakers and  governments dominated by the ruling Al-Sabah family.

“Kuwait is still undergoing a political crisis since 2011, and that page has not yet turned,” Deyain told AFP.

“There are still disputes over the electoral system and mismanagement of state funds.”

Deyain said he expected some lawmakers in the new assembly to be “more dynamic” in trying to resolve some issues.

The election results are expected to be announced on Sunday morning.

Kuwait was the first Gulf Arab state to adopt a parliamentary system in 1962. Women were granted the right to vote and to stand for election in 2005.