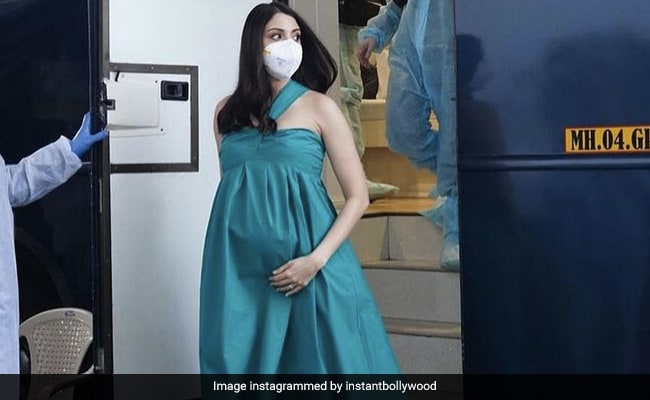 Mom-to-be Anushka Sharma occupied a spot on the list of trends on Sunday, courtesy pictures from her ad shoot. Anushka, who is expecting her first child with husband, cricketer Virat Kohli, stepped out on Sunday to shoot a commercial and pictures of the actress dressed in a teal green gown from the sets have gone crazy viral on social media. In the photos, Anushka Sharma can be seen sporting a face mask while stepping out of a vanity van. Needless to say, her baby bump and pregnancy glow stole the spotlight on the Internet. Several fan clubs have shared the photos on their respective accounts.

Check out the viral photos here:

Earlier in the day, Anushka gave her fans a glimpse of her work life on her Instagram story. She posted a selfie in which she can be seen getting ready for a shoot. “Hi,” she captioned the post.

Anushka Sharma and Virat Kohli announced their pregnancy in August. The couple posted adorable pictures of themselves with this caption: “And then we were three! Arriving January 2021.”

Anushka Sharma’s posts from her pregnancy diaries always take the Internet by storm. We have picked a few for you guys, take a look: