AstraZeneca Plc and the University of Oxford, among the front-runners in the quest to deliver a Covid-19 vaccine, face mounting questions about their trial results after acknowledging a manufacturing error.

While an announcement Monday by Astra and Oxford showed their shot was 70% effective on average in a late-stage study, the scant details released by the UK partners have sparked worries about whether regulators would clear it. In a later statement, Oxford said a difference in manufacturing processes led to some participants being given a half dose instead of a full one.

Astra and Oxford said their vaccine was 90% effective when a half-dose was given before a full-dose booster, and that two full doses showed an efficacy of 62%. But the head of the US vaccine program known as Operation Warp Speed said the next day that the dose showing the higher level of effectiveness was tested in a younger population, and that the half-dose was given to some people because of an error in the quantity of vaccine put into some vials. None of this was disclosed in Astra’s original statement.

The findings had fueled optimism that an end to the pandemic is in sight and that multiple vaccines to combat Covid-19 could be ready soon following positive results from Pfizer Inc. and Moderna Inc. Astra and Oxford remain near the front of the pack, although the way they have handled the large trial has rattled scientists and investors, raising the risk it could slow them down. 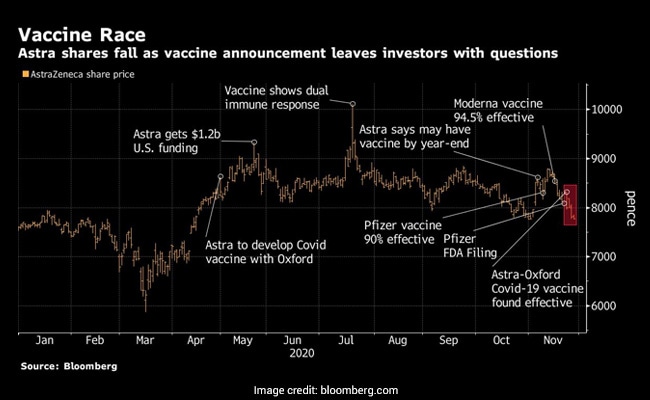 “Any time you have confusion in trials it’s not a good thing because it effectively removes any kind of credibility you had,” said Ketan Patel, a fund manager at EdenTree Investment Management. “I think there will be a lot more scrutiny of Astra’s product due to the manufacturing issue.”

In its statement, Oxford said that when it was apparent that a lower dose was used, it was discussed with regulators, and an agreement was reached to push ahead with the two regimens. “The methods for measuring the concentration are now established and we can ensure that all batches of vaccine are now equivalent,” according to the university.

A spokesman for Astra said the trials were conducted “to the highest standards” and more analysis is being done to refine the efficacy reading.

Astra shares were little changed Thursday after slumping 6.2% earlier in the week amid questions about the trial results.

“The most likely explanation for the divergent efficacy in its interim analysis is either chance or patient demographics,” Sam Fazeli, a Bloomberg Intelligence analyst, wrote in a note. “Either way, approval based on current data means people will be inoculated with a vaccine the true efficacy of which is unknown.”

The battle against Covid-19 is at a turning point with encouraging vaccine trial findings coming this month. One vaccine from Pfizer and BioNTech SE and another from Moderna Inc. were both about 95% effective in preliminary analyses of trials of tens of thousands of volunteers.

Fazeli added: “We remain most convinced by the Moderna and Pfizer data for now.”