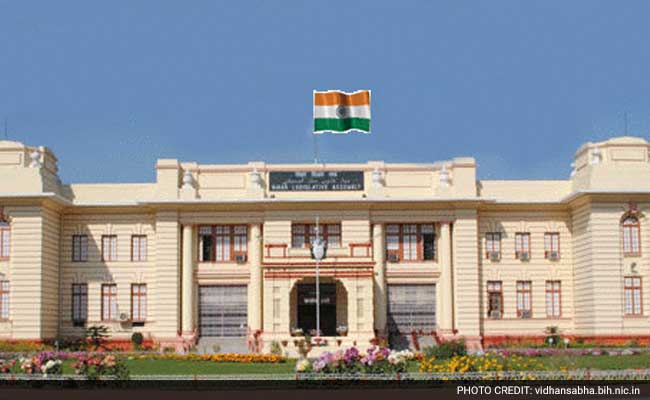 Opposition leaders walked out in protest from the Bihar Assembly session. (File)

Members of the ruling NDA and the opposition Grand Alliance nearly came to blows on Saturday inside the Bihar assembly, where proceedings had to be adjourned twice as allegations of revenue minister Ram Surat Rai’s involvement in illegal liquor trade triggered outrage.

Marshals had to be called during the post-lunch session and they stood in the well, forming a protective wall between agitated members from both sides who jostled next to it, and, upon being thwarted, shouted at the top of their voice.

Speaker Vijay Kumar Sinha adjourned the House till 3:30 PM and RJD members alleged that “casteist and misogynist remarks” were hurled from the treasury benches when they objected to the interruptions that were being made when leader of the opposition Tejashwi Yadav was making a statement.

Mr Yadav had risen to take part in the debate on the budgetary demand for health department and, in the course of his speech, made a reference to “sharaab bandi” (liquor ban), which drew angry remarks from MLAs of the ruling JD(U)-BJP combine.

The ruling coalition was further enraged by the RJD leader’s remark that the leader of the opposition holds a constitutional post, but the deputy chief minister does not.

The insinuation was towards Tarkishor Prasad who had sought to snub Mr Yadav in the pre-lunch session while the RJD leader, a former deputy CM himself, had expressed the desire to place on record “evidence” of minister Rai’s complicity in a case relating to recovery of liquor from a school in Muzaffarpur district last November.

This angered the legislators of the RJD and allies Congress and the Left and the ensuing melee, which erupted around quarter past noon, led to adjournment of proceedings till 2 PM.

After sitting in front of the Speaker’s chamber for some time, Mr Yadav led the opposition leaders in a march to the Raj Bhavan, just a kilometre away, and called on the governor.

He said: “We are appalled at the manner in which members of the cabinet are trying to dictate to the Chair. If this is how they want to run the House, then the opposition will be left with no choice but to boycott the proceedings.”

He also alleged that the opposition was being throttled since the issue involved a minister from the BJP “before which Chief Minister Nitish Kumar is helpless”.

Earlier, soon after the commencement of proceedings at 11 am, Mr Yadav had sought to draw attention of the Chair to an adjournment motion moved by an RJD MLA, which the Speaker said would be raised at “the appropriate time”.

Opposition leaders walked out in protest, but returned at noon when the Zero Hour began, and the legislator Rekha Devi’s motion was rejected though she was allowed to read out the draft.

By the time the House re-assembled at around 3:30 PM, the dust seemed to have settled down and members from the treasury benches as well as the opposition expressed regret over the ugly turn of events.

Minister for Parliamentary Affairs Vijay Kumar Chaudhary came out with a conciliatory speech and also assured the House “the government has no intention to dictate terms to the Chair”.

Mr Yadav started off, before leaving for the assembly, with a press conference at his residence where he came out with documents and photographs to establish that Mr Rai was actively involved in matters of the school where liquor had been recovered and hence could be held accountable.

The minister, who holds revenue and land reforms portfolio, did not speak inside the House but addressed a press conference in the afternoon, ostensibly to present his “report card” upon completing 100 days of his tenure.

He said: “Tejashwi Yadav’s father (Lalu Prasad) must be aware of the credentials of my late father Arjun Rai after whom the school is named. The property belongs to a brother of mine. If my relationship with him makes me guilty, would Tejashwi and his brother Tej Pratap apply the same yardstick to themselves, given the fact their father is convicted in fodder scam cases?”