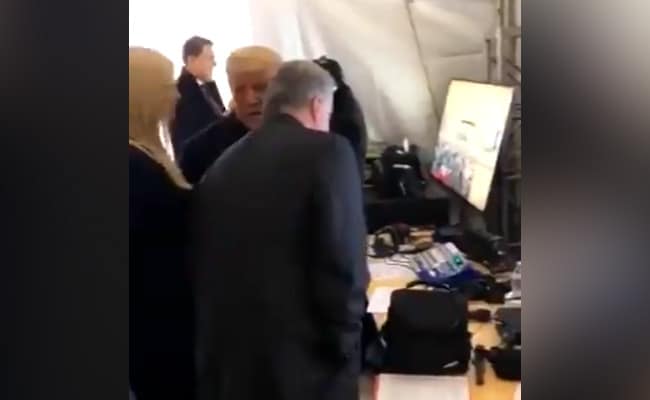 President Donald Trump, his daughter Ivanka, son Don Jr. and others can be seen at an event where many are partying and dancing to pop songs just hours before a shocked world watched pro-Trump supporters lay siege to the US Capitol – scaling walls, smashing windows and desecrating offices of American lawmakers.

It is unclear if the video, which was filmed by Don Jr. on his mobile phone, was shot before or after Trump’s speech on Wednesday, in which the President – who has repeatedly, and without proof, attacked the outcome of November’s election – called on his supporters to “fight much harder” and “walk down to the Capitol… because you will never take back our country with weakness.”

The video begins with Don Jr. thanking “awesome patriots (who are) sick of the bullshit”. Ivanka also called them “patriots” in a tweet posted after violence broke out, but deleted it after backlash.

Don Jr. then urges his father’s supporters to “fight” before panning the phone to show Donald and Ivanka Trump talking to senior White House figures as multiple TV screens show news footage of their supporters marching on the Capitol.

Others in the video can be seen laughing and dancing as a pop song plays loudly in the background.

The president and his co-conspirators watched, cheered and danced… as the violence they incited was about to go down. This needs to be way more viral. pic.twitter.com/SOrJmBbLKD

The video has been widely shared online, with several people pointing out it appeared as if the Trumps and their entourage had an idea of the carnage that would unfold over the next few hours. There were renewed calls for Trump to step down and others demanding his family and he be “arrested now”.

“The Trumps threw an Insurrection Party and even did a countdown to the invasion of the Capitol while playing ‘GLORIA’… shows design and planning,” one user wrote.

this is beyond sickening…most people were watching with sadness, tears and fear – these traitors to America were laughing, dancing, smiling.

This video is what I imagined was happening in the enemy states of the U.S. as I watched this horror play out.

Not in the White House, by the current president and his family, on U.S. soil.

There can be no clearer act of treason. Period.

Our tax dollars paid for this watch party and encouragement video. While we watched in horror, they were enjoying the view. This is isn’t fiddling while Rome burns, this is cheerleading…

Unfortunately, many look at this and say “well it was before the violence started so it doesn’t count” or some bullshit like that. They cheered this on. They wanted this. Storming the capitol was the least the could have happened. And five people are dead.

Laura Brannigan, who sang the original song, also tweeted, saying Trump (who has often used popular songs in his campaigns without getting necessary permission) had no right to play the song.

No permission to use “Gloria,” nor endorsement of him, past or present, was granted to Pres. Trump on behalf of Laura or her legacy management company, & we strongly & vehemently DO NOT condone yesterday’s events at the Capitol.+~Kathy Golik, Legacy Manager#LauraBranigan#Gloria

In the early hours of Thursday morning (India time) visuals emerging from the Capitol resembled something from a coup d’état or terrorist attack.

A mob, some in costumes and many waving flags – American and the Confederate – and wearing Trump’s signature red campaign caps, stormed into the building and made it into the House and Congress chambers, where lawmakers were debating challenges to Biden’s victory. 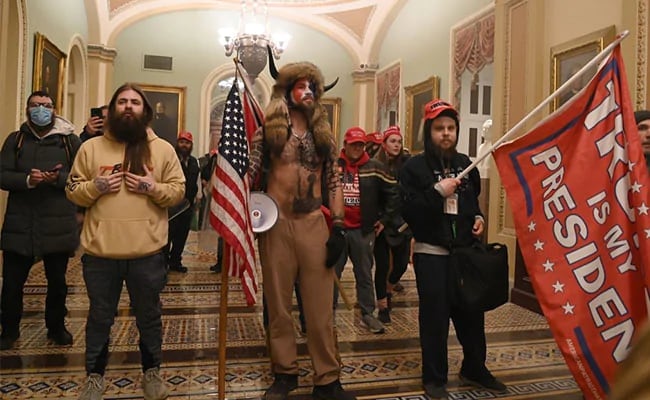 At least five people, including a police officer, died because of the violence and over 50 have been arrested. Authorities fired tear gas and fired guns inside the Capitol to disperse the rioters.

After several hours of mayhem, Trump issued a short video on Twitter telling people to “go home.” But there was no indication of regret, much less condemnation of the violence.

President-elect Biden issued a statement too, in which he accused the outgoing Republican leader of an “all-out assault on the institutions of our democracy“.

Since then calls have grown for Trump to be impeached (for the second time) or be removed under the 25th Amendment to the US Constitution, which would see him declared unfit to stay in office.

Friday evening Trump tweeted to say he would not be attending Biden’s inauguration.

With input from AFP, Reuters